The South Pole is one of the most special places where I have had the pleasure to run and, much to my surprise, extreme cold temperature are easily overcome with not-so-extreme gear. 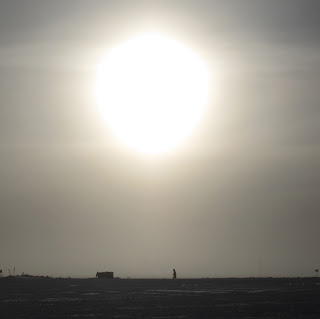 My friend Nick was outside for work on March 2nd, when he saw me running in the distance.  He was quick with his camera to take a photo of my silhouette against the setting sun.  The temperature was -52 C (-62F), the wind about 10 mph, and the sun 8 degrees above the horizon.
When I first arrived at the South Pole on November 2nd, with temperatures around -44 C (-48 F), it felt very cold and inhospitable.  Within a few days a fierce storm broke wind speed records for the month of November at close to 50 mph.  I thought that I had made a big mistake committing to spending one whole year here at the South Pole, imagining that I would never be able to go out and exercise.  The reality has been quite different.  I have never run as much since my years in college.  In the last month I have averaged 32 miles/wk, going out an average of 6 days a week, not to mention the marathon that a bunch of us ran in January.  A couple of days ago, on March 14, the temperature dropped down to -64.6 C (-84.3 F), and I still enjoyed a nice 5-mile run on the skiway in light winds.  All it takes is a little bit of warm gear, or maybe a lot of it, depending on how you look at it: 12 lbs (5.4 kg), as I weighed mine.  Here is what I wear: 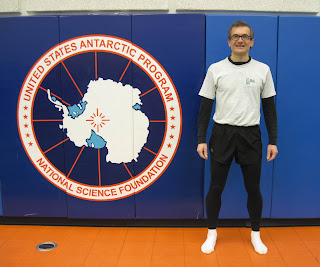 I start with a basic layer of cotton socks, spandex legwear, a long sleeve shirt, and a cotton shirt.  This is what I would wear in the coldest mornings at home, in California, when temperatures approach the freezing point.  Running shorts are probably not necessary here, but I like them because they have a small internal pocket to hold my MP3 player.  It is important to choose the music before starting the run, because taking off the gloves to tweak the volume or change the songs during the run would cause the hands to become dangerously cold.  I have tried it at -45 C (-49 F), and I do not recommend it, both for the fingers and for the MP3 player itself.  I run the wires inside my cotton shirt because, if exposed to cold temperature, they become as rigid as steel. 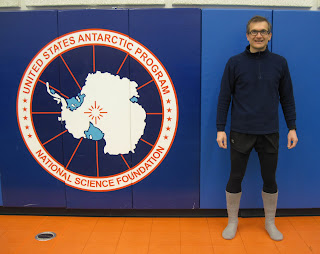 The next layer of clothing is a pair of heavy wool socks and a 100% Polyester thermal top.  I only started using the thermal top at temperatures below -55 C (-67 F). 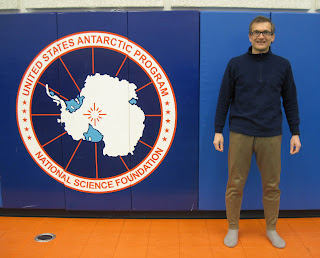 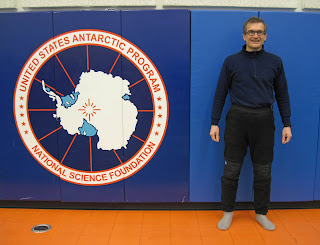 Next is a 300-weight fleece bottom, this one made by The North Face.  I have owned these pants for more than 10 years and they have kept me warm in so many different circumstances that would be too long to list.  I never thought they would prove useful all the way down to the South Pole. 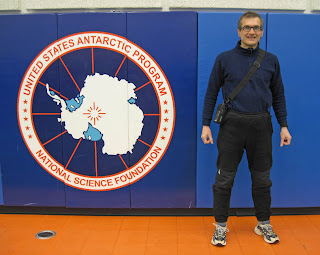 Next the UHF radio.  This is a very important piece of safety equipment, as it would allow me to call for help if for any reason I ran into some difficulty.  Before I leave I make sure that the battery has been freshly charged, that the radio is set on the proper channel, so that I can make an emergency call by pressing a single button, and that the radio is somewhat close to the body so that it does not get too cold and inoperable.  In the summer, when temperatures were above -40C (-40 F), I would hold the radio in my hands, but as temperatures got colder, holding the radio would make my hands cold even through two pairs of gloves, so our radio Engineer, Mike, gave me a shoulder strap, which works very well.
For shoes I use an old pair of Adidas Boston.  I would not use them on asphalt any longer, as they have probably lost most of their cushioning, but here at the South Pole, the cushioning is provided by the soft ice and snow on the ground more than by the engineered layers of materials in the shoes -running at the South Pole is a little bit like running on partially wet sand.  In any case, the soles of the shoes become very rigid in cold temperatures, particularly below -50 C (-58 F), which defeats the purpose of any cushioning built into the shoes.  I bought a new pair of running shoes (Adidas Glide) through Zappos -which delivered free of charge all the way to the South Pole before station closing- but I would not want to use them in such cold temperatures for fear of causing long term damage to the rubber in the soles.  In any case, my old Adidas Boston have done great so far down to -64.6 C. 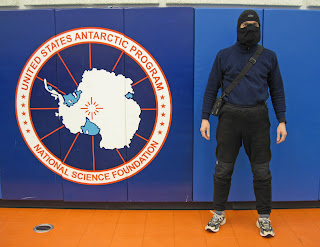 Next is the balaclava, a piece of equipment that covers the entire head, leaving just an opening for the eyes.  Breathing is through a mesh woven in correspondence of where the mouth is, and there is a small opening to breathe through the nose.  The one I use is made by Outdoor Research. 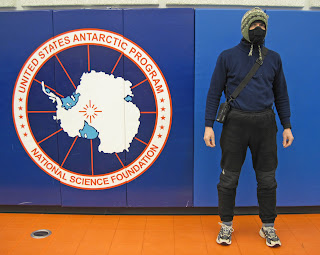 The balaclava leaves dangerously exposed a spot on the temple, close to the eyes.  I found that out when one day, with temperatures around -48 C (-54 F) I caught some wind on the way back to the station and it caused a little windburn.    I secure it by tying a double knot under my chin, so that it stays nice and tight. 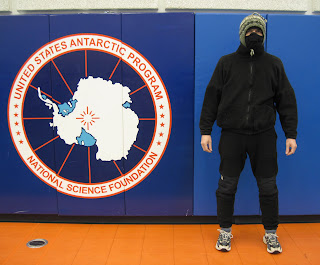 Next I wear a fleece top.  This is part of the gear that we are issued for the South Pole, and is equivalent to any good quality 300-weight fleece on the market. 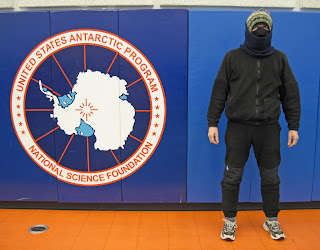 The last piece of head protection is the neck gaiter.  I only use it when temperatures fall below -40 C (-40 F), mostly as an emergency piece of clothing, in case the wind picked up unexpectedly, and found its way into my nose or mouth through the mesh in the balaclava.  I have not had to lift the neck gaiter over my face so far, but I like to know that I have at least a little bit of extra gear along with me.  Another technique that I found very effective against headwind, which was taught to me by my friend Healy, who was here in the summer, is to run backwards.  That is because the face is typically more exposed than the back of the head so sometimes, if it gets a little windy, I alternate running forward and backwards.  This is fun, too.  Of course, this works well here at the South Pole where the terrain is flat with absolutely no obstacles in any directions for miles and miles.  At home I would not want to do this, unless I were maybe on a track. 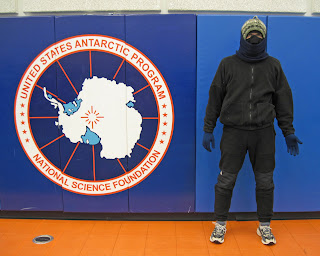 All is left to wear is gloves.  The first layer is a pair of wool glove liners, just like the ones we would wear in cold weather at home. 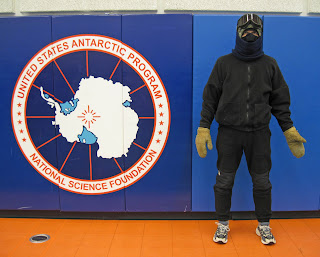 The second layer is a pair of leather mittens lined with insulation inside.  These work very well for temperatures down to -45 C (-49 F) and for exposures up to a couple of hours. 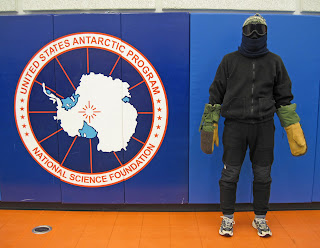 Below -45 C (-49 F), I use gauntlets on top of the mittens.  They consist of two pairs of gloves one inside the other: an inner layer of synthetic insulation, and an outer layer of leather, further covered with synthetic fur on the outside of the hand.  The gauntlets also protect the arm almost to the elbow.  It is difficult to use the hands for any type of work with all these gloves on but, just for running, this combination is excellent.  Before putting on the gauntlets I lower my Smith goggles onto my eyes, making sure I seal any possible gaps that could leave an entryway for the wind.  The objective here is to have enough layers to provide an air pocket around the body, and to make sure that no skin is exposed. 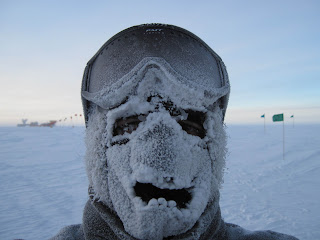 Wonderful South Pole!  The last layer of insulation is provided by nature itself!  While the ice mask that forms after running for 1 hr outside may look a little macabre, it actually conceals warmth inside.  The ice is the result of breathing, which condenses and freezes immediately upon contact with the air.  In turn, the layer of ice provides excellent thermal insulation and extra protection against the wind.  It is remarkable how warm one can be inside, after the ice has formed, which only takes a few minutes.  As I said in a previous blog, it is a little bit like being inside an igloo.  This photo was taken on March 17, only 5 days before sunset, with a temperature of -52 C (-62 F) and an average wind of 12 mph.  High clouds in the sky made the sun invisible, so I lifted the goggles over my forehead about halfway through my run.  On the left on this picture in the far background is the South Pole Telescope.
Now, you may think that all this gear would make running cumbersome, but I found instead that it still allows plenty of freedom for movement.  What limits my speed is not the amount of clothing that I wear, but the soft surface of the snow and ice on which I run on.  While at home I typically run an 8-minute/mile pace, here I run more of a 10~11 minute/mile pace, regardless of how cold it is and how many layers of insulation I wear.  Finally, I should make a point that here at the South Pole we live at an average barometric pressure of 681 mbar, which is equivalent to a physiological altitude of 10,591 ft (3,228 mt).  That is one third less air than at sea level.  Therefore, with less air and humidity to conduct the heat away from the body, temperatures here at the South Pole may not feel as cold as they would at sea level.  This is one of the few rational explanations that I can give on how it is possible to have fun and feel comfortable running at these extreme temperatures.
It actually does not get much colder than this here at the South Pole.  Although the coldest temperature ever recorded here is -82.8 C (-117.0 F) on June 23, 1982, the average temperature in July, which is the coldest month is -59.8 C (-75.6 F), which is warmer than the coldest temperature that I have run in.  Nevertheless, I am afraid that my happy days of outdoor running at the South Pole are counted for two reasons: first, it is soon going to be dark for six months; and second, snowdrift is starting to accumulate on the skiway, making it more and more difficult to find firm ground to run on.  I hope I can still run a few more days until sunset.  We'll see.
Posted by Marco Polie at 4:16 PM